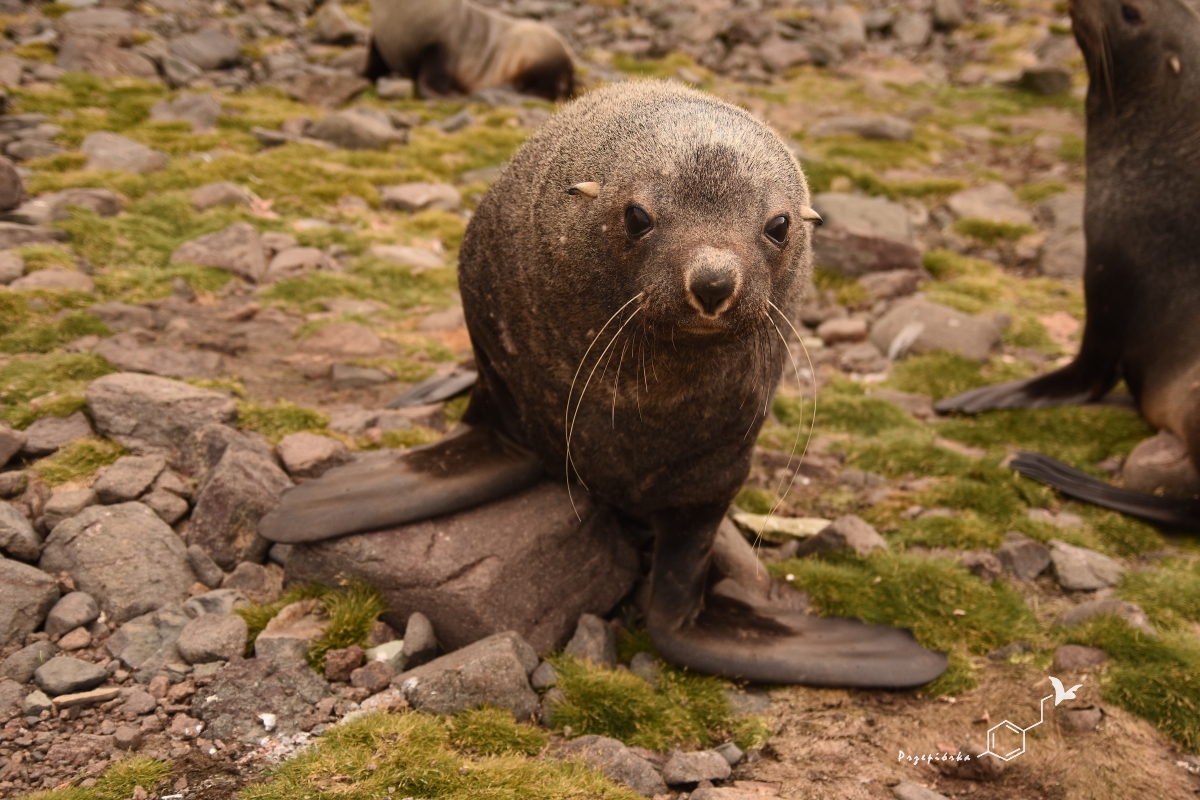 The western shore of the Admiralty Bay, on which Arctowski Polish Antarctic Station is located, belongs to one of the most enriched natural areas of King George Island. The vegetation on King George Island is represented by the tunder species, i.e. mosses, lichens and few vascular plants. There are 72 species of bryophytes on the island. The dominant mosses are the Alpine haircap (Polytrichastrum alpinum), Calliergon sarmentosum and Calliergidium austrostramineum. Right next to the station there is one of the largest seaside moss carpets of Antarctic, called Jasnorzewski Gardens. In addition to the bryophytes, this area is largely made up of the Antarctic hair grass (Deschampsia antharctica) and the Antarctic pearlwort (Colobanthus quitensis) of the carnation family. These are the only two vascular plant species naturally occurring in the Antarctic. In the Jasnorzewski Gardens, there is Lake Wujka. The freshwater reservoir provides a habitat for small crustaceans – the largest representative of freshwater invertebrates, 16 mm Branchinecta gaini, also known as “fairy shrimp” and the smaller Boeckella poppei copepod. The moss carpet is fed with nutrients from the nearby breeding colony of the Adélie penguins (Pygoscelis adeliae). Guano, a seemingly unimportant bird remnant, is of key importance for the Antarctic terrestrial ecosystem; besides marine aerosol, it is the only source of nitrogen and phosphorus available for plants and fungi. As a result, ornithocoprophilic colonies were created, i.e. colonies of organisms that benefit from the faeces of birds. One of the most beautiful Antarctic tundra colonies, mainly due to its orange yellow lichen colour, is the Caloplaca regalis-Caloplaca lucens community, which often accompanies large penguin colonies. It is worth mentioning that carotenes found in the mould of C. regalis are almost identical to those from the penguin guano, i.e. krill (Euphausiacea), a small crustacean that forms the basis of the food chain in the Antarctic. Due to the harsh climate and low availability of nutrients, the most common vegetation community is saxicolous communities at a longer distance from the ocean. The lichens, i.e. lichenized fungi (Lichenes) – over 190 species – are a strong representation of organisms that occupy the above habitats. The most characteristic of these is Usnea antarctica and map lichen (Rhizocarpon geographicum).

Antarctic land animals (the ones who spend their entire lives on land) on King George Island are represented only by tiny invertebrates, among others 3 species of springtails (Collembola), and insects (Insecta) – 2 flies from the Chironomidae family – Parochlus steineni and the wingless Belgica antarctica, an endemic species for the Antarctic.

Since the opening of the Drake Passage between South America and the Antarctica and the formation of the Antarctic Circumpolar Current (about 40 million years ago), the Antarctic has been isolated from the rest of the world. The emergence of the Antarctic Circumpolar Current forced organisms living in the Southern Ocean to slowly adapt to new, extremely harsh conditions. Those who did not succeed in doing so became extinct. Therefore, in the Antarctic there are no crabs, which in other marine ecosystems are often the dominant group. The powerful current around the Antarctic has also become an obstacle preventing the migration of marine invertebrates. The animals living in the Southern Ocean were unable to leave, and the species outside could not enter. This means that the Antarctic invertebrates have evolved largely independently of the “rest of the world”. This is why many endemic species, species not found in any other part of the world, have been found in these waters. Depending on the systematic group, the number of endemic species varies from 50% to even 90%.

A key element of the Antarctic ecosystems is the small marine crustacean Euphasiacea krill, which is the basis of all food chains in the Antarctic. It is the most numerous macroscopic organism that inhabits our planet. Krill is found throughout the Southern Ocean. Its population is approximately 900 trillion individuals (900,000,000,000,000). It concentrates in large shoals extending hundreds of square miles, colouring the sea pink. In 1m3 of water there can be up to 10 kg of these small crustaceans, which gives a density of about 20 individuals per litre. Adult krill provides the basis for the diet of most Antarctic animals: fish, penguins, seals, fur seals, and whales.

One of the very interesting groups of animals is benthos, i.e. organisms inhabiting the seabed. We currently know over 88,000 species of benthic organisms, of which about 4,900 live in waters around the Antarctic, and almost 500 species in the Admiralty Bay, on which the Polish Antarctic Station is located. These include sponges, corals, anemones, starfish, sea urchins, brittle stars, sea cucumbers, mussels, snails, crustaceans, polychaetes and even cephalopods. The list of species is not exhaustive, new, previously unknown invertebrates are discovered every year. These organisms, able to successfully live in such unfavourable environment, are characterized by a number of interesting adaptations. These include low metabolism, slow growth and development, longevity, high resistance to hunger, omnivorism and giganticism.

Penguins, however, are the most associated with the Antarctic. These flightless birds inhabiting only the southern hemisphere can also be found in Africa or South America, but their range is closely related to the cold ocean currents. Currently, the penguin family is represented by 18 species, 3 of which nest on King George Island: Adelie penguins (Pygoscelis adeliae), gentoo penguins (Pygoscelis papua) and chinstrap penguins (Pygoscelis antarcticus). Sometimes single specimens of king penguins (Aptenodytes patagonicus) and macaroni penguins (Eudyptes chrysolophus) also appear in the Admiralty Bay. Apart from penguins, in the vicinity of the station, there are also nesting flying birds from the orders: Charadriiformes, Procellariiformes and Pelecaniformes.

In the Antarctic, the mammalian division is limited to only two orders: pinnipeds and cetaceans. The pinnipeds are represented by Phocidae and Otaridae, whose only representative in the Antarctic is the Antarctic fur seal (Arctocephalus gazella). Seals found near the Polish Antarctic Station include, among others the largest representatives of these groups – southern elephants seals (Mirounga leonina), crabeater seals (Lobodon carcinophagus), Weddell seals (Leptonychotes weddellii), as well as some of the key Antarctic predators – leopard seals (Hydrurga leptonyx).

The most common cetaceans found in the Admiralty Bay are humpback whales (Megaptera novaengliae) and Antractic minke whales (Balaenoptera bonaerensis). At times, it is possible to observe the waters of the Bay being patroled by the pods of killer whales (Orcinus orca).